Family-friendly community platform dedicated to Defending Life. Supported by several high-profile international organizations, CyberDodo, the Defender of Life, brings together individuals who share a respect for the planet and its inhabitants to promote their own happiness as well as that of future generations.

Many animals – including birds, fish and mammals – migrate along set routes in search of food or breeding grounds. How best to protect them in a rapidly changing world is the focus of a major UN wildlife meeting which opened in Gandhinagar, India, on Monday.

UN Secretary-General António Guterres on Sunday began a three-day visit to Pakistan, recognizing the country’s decades of “outstanding generosity and solidarity” as one of the world’s largest hosts of refugees, and highlighting its commitment to climate action.

Millions of people worldwide will get to share their views on climate action through a UN campaign launched on Thursday aimed at connecting them with Governments and policy makers.

Fresh fears of accelerating damage to the planet’s ice sheets and sea level rise have been fuelled by confirmation from the UN’s weather agency that the Antarctic likely saw a new temperature record of more than 18°C on Thursday.

2020: the year for action, to ‘rise up’ and safeguard ocean life

With the ocean in deep crisis, members of civil society and philanthropic organisations are urging governments and corporations to take bold action to safeguard the ocean.  After a two-day preparatory meeting in New York ahead of June’s UN Ocean Conference in Portugal, activists handed over what they termed “A Blue Call to Action” to the UN Secretary-General António Guterres, on Wednesday.

Ocean Conference has potential to be a ‘global game-changer’

The second global Ocean Conference taking place in Portugal in a few months’ time promises to be “a critical moment” for the health of life under water and on land, the President of the UN General Assembly said on Tuesday, as preparations got underway.

Climate action ‘both a priority and a driver of the decade’: Guterres

Climate action will be both a priority and a driver of world affairs through the coming decade, United Nations Secretary-General chief António Guterres announced on Monday, during a speech at UN Headquarters in New York, in which he declared that the next ten years will be “crucial for achieving a fair globalization, boosting economic growth and building peaceful societies”.

Suriname has become the second nation globally to outline updated plans to fight climate change in the hope of ensuring that any future increase in the temperature of the planet does not exceed 1.5 degrees Celsius above pre-industrial levels.

Against the backdrop of India’s famed “pink city” of Jaipur, the world’s largest literature festival hosted the UN’s top representative in the country on Monday, who told audience members attending a special session on the climate emergency, that the Organization is working flat out to slow the pace of damaging climate change.

FROM THE FIELD: Sourcing clean water in Ghana

Communities in northern Ghana are benefiting from the rehabilitation of water sources which is expected to boost livelihoods and build resilience against climate change, thanks to a project supported by the UN Development Programme (UNDP).

FROM THE FIELD: Niger supporting the most vulnerable, as crises mount

The number of people requiring humanitarian assistance in Niger, a country which the UN humanitarian agency, OCHA, says is “being assaulted on all fronts”, is expected to increase in 2020.

The world is “doomed” in the face of climate change unless major industrial nations reduce their greenhouse gas emissions, UN Secretary-General António Guterres told business leaders at the World Economic Forum in Davos, Switzerland, on Thursday.

FROM THE FIELD: Weeding out Mexico’s unwanted beach invader

An invasive species of seaweed which has blighted tourist beaches in Mexico has become more aggressive due to the heating effects of climate change. But now, thanks to support from the UN Development Programme (UNDP), efforts are underway to hold back its advance and protect local ecosystems.

The UN Human Rights Committee has determined that countries cannot deport people who have sought asylum due to climate-related threats.

Ethiopia, Kenya and Somalia are dealing with desert locust swarms of “unprecedented size and destructive potential” that could spill over into more countries in East Africa, the United Nations Food and Agriculture Organization (FAO) warned on Monday.

Cities – hubs of creativity and new ideas – can provide solutions to resolve humanity’s “suicide war” against nature, and lead the world towards a sustainable future, UN Secretary-General António Guterres said on Saturday in Lisbon, which has been named the 2020 European Green Capital.

The climate crisis, as well as persistently high inequalities, and rising levels of food insecurity and undernourishment, is affecting the quality of life in many societies and fuelling discontent, the UN warned on Thursday, on the publication of the 2020 World Economic Situation Report (WESP).

Inaction when it comes to the fight back against damaging climate change is not an option, the President of the UN General Assembly told a major energy conference in Abu Dhabi on Friday.

Raging bushfires wreaking havoc across Australia have prompted the UN Children’s Fund, UNICEF, to offer its support to the Australian Government and its partners which are battling the “unprecedented disaster”.

The UN Secretary-General António Guterres called on world leaders to de-escalate geopolitical tensions on Monday, which he described as being “at their highest level this century” as the new decade dawns.

From sustainable development to economic development, and human rights to humanitarian aid, UN News provides daily coverage across all of the Organization's  key issues – health, migration, climate change and so much more.

Guterres's message for 2020: In world of turmoil, youth are its ‘greatest source’ of hope

As the world enters 2020 with “uncertainty and insecurity all around”, the United Nations chief maintained that the world’s young people are its "greatest source” of hope.

With the 2020s now in full view, welcome to the second in our three-part series looking back at some of the major UN-related stories of the past decade. In part two, we take in the years 2014 to 2016, which saw the worst outbreak of Ebola ever recorded; new hope that the climate crisis could be tackled by world leaders, through the historic Paris climate agreement; a UN mission in Colombia to facilitate a much-awaited peace process; and the launch of the UN’s 2030 Agenda, a plan of action for people, the planet and prosperity.

Lesotho: Tens of thousands ‘one step away from famine’ as drought impacts harvests and UN launches flash appeal

Devastating drought in the southern African nation of Lesotho has left more than half a million people facing severe food shortages and tens of thousands “one step away from famine”, UN humanitarians said on Friday, in an appeal for funds.

Among today’s stories: more men are quitting nicotine than ever before, a big drop in cholera cases was recorded between 2017 and 2018, and the UN calls on developed countries to raise their climate ambitions, following the disappointment of COP25.

An important opportunity lost as COP25 ends in compromise, but Guterres declares 'we must not give up'

Negotiations at the COP25 UN climate conference in Madrid finally ended on Sunday, wrapping up an event which saw much progress made by the private sector, and by national, regional and local governments. However, there was widespread disappointment that no overall consensus was reached on increased climate ambition.

As COP25 goes into the night, Guterres calls for more climate ambition

With national delegations thrashing out an outcome agreement at the UN COP25 climate change conference in Madrid, the UN chief has called on countries to be more ambitious, side strongly with science, and commit to stronger action.

July 2018 = More than 800'000 fans for CyberDodo on Facebook! Let's mobilize to reach as soon as possible our next goal: one million. The more we will be the strongest our voice will be heard for the Rights of the Child and the Environment: the Rights of Future Generations ... Kind regards to all of you! 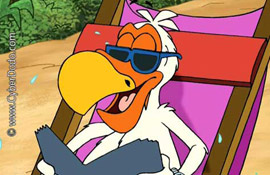 CyberDodo Commits to the Right to an Education (2-38)

CyberDodo argues with a father about allowing his son to study. Faced with his refusal, he asks the...

Today obesity can be considered as a worldwide epidemic as it affects almost 1.5 billion people, in...

The International Convention on the Rights of the Child guarantees the right to play in its article...

Always something more, to the extent of treating farm animals as if they are commodities and not as...

Part of our capacity to feed almost 7 billion people at the beginning of the 21st century has been...

AFDP is a non-profit organisation based in Jordan which was established by HRH Prince Ali Bin Al...

Nature & the Rights of the Child: Kyllian Guerin

One of the greatest hopes of the surfing world is a CyberDodo Ambassador!

Coalition to Stop the Use of Child Soldiers

The Coalition’s vision is of a world where all children (boys and girls below the age of 18) can...

Hello and welcome to CyberDodo!

Family-friendly community platform dedicated to Defending Life. Supported by several high-profile international organizations, CyberDodo, the Defender of Life, brings together individuals who share a respect for the planet and its inhabitants to promote their own happiness as well as that of future generations.